The year is whizzing by. Observations about the end of summer, the arrival of autumn and the imminence of Hallowe’en have seamlessly segued into exhortations to start preparing for Christmas. Copies of the “Holly Bough” have appeared. There is no surer indication of the nearness of Christmas for citizens of the real capital and its environs than the arrival in the shops of that timeless publication.

October was a busy month in Schull. The joint production by Schull Drama Group and Playacting Theatre of Peter Shaffer’s play, “Amadeus” played for 6 performances, gathering bigger and bigger houses for an enthralling production. Director Karen Minihan and her team treated us to a theatrical tour de force. It was some achievement. Well done.

Halloween There’s no doubt about it, but we’re a great race of people. The forecast for Hallowe’en was grim and the forecast was right. Rain swept in over us all day long, it varied in intensity and moisture content, but it definitely rained, all day. Did that stop the citizenry from getting into the spirit of things? (apologies, couldn’t resist it) not likely! All the businesses and home-owners in town had wonderfully imaginative window displays. From mid-afternoon groups of unearthly creatures from corpse brides to vampires roamed the streets. They were of every age and size and shape. The costumes were incredible, people showed really impressive ingenuity and creativity. Little people made an impressive haul of highly coloured, sugar saturated treats. I think a long night stretched ahead of many parents, between vampire-induced nightmares, sugar-fuelled hyperactivity and overstretched digestive systems. The younger children were able to release lots of their energy at the Kiddies Disco in the Parish Hall (sponsored by SDCC) and the trick or treating ended with a brilliant re show, performed, still in the rain, by Fire Inferno. The choreography and production values of this performance were amazing and a really appreciative audience stuck it out until the show came to its spectacular finale. Thank you to Pobal Schull and to Cork County Council for co-ordinating and funding this imaginative piece of street art. Thanks also to all the volunteers who helped out on the night.

Schull Playground The broken and absent equipment in the playground has been a bone of contention for well over a year now. It is to be presumed that since the playground is Council property, there is a budget allocation for its maintenance. One of the pieces of equipment has been recently repaired, it is to be hoped that this is an indication of the intention to refurbish the rest of the playground. Our playground enjoys the most perfect situation – it should have proper play equipment too.

It’s very heartening to see the formerly empty Waterside premises being brought back to life by its new owners. We wish the O’Driscoll family every good fortune with their new venture The Townhouse O D’s gastro pub. We look forward to seeing it open in the very near future.

Recent Death The community of the Mizen showed its support for the Healy and Tuite families in their grief at the tragic loss of their son, brother and grandson, Kodie. The voluntary effort of the rescue services and the general public was tremendous. We wish to extend our sympathies to all Kodie’s family and friends.
Ar dheis Dé go raibh a anam.

Christmas Baubles. The Schull 2019 Christmas Baubles are now available in the shops in the village as well as online. This year’s bauble has been designed by Sabine Lenz and features her trademark love of script and the Irish language. These baubles are very collectable and make perfect gifts.
This is a fund-raising project for SDCC and all the proceeds go back to our community.

Shop Local for Christmas. The Schull Business & Tourism Association is againsponsoring the Shop Local for Christmas campaign. There will be a Monster Raffle just before Christmas and to enter all you have to do is buy locally and support your village. We are fortunate to have so many wonderful and unique
shops in Schull. And shopping in Schull has so many other advantages: If you forget a bag or a parcel you are sure to be reunited with it, the danger of pickpockets is minimal, there is a wide range of retail outlets, parking is free, there are no queues and refreshments of every kind are always at hand. What’s
not to like…? Keep an eye on the All I Want For Christmas is Something Local Facebook page for more information.

Scoil Mhuire Primary School is bidding a fond farewell to Diarmuid Duggan whois leaving Scoil Mhuire National School to take up a position as Principal in Enniskeane/Ballineen. We extend a warm welcome to our new Principal Maireád Drinan and wish her every success in our well-loved primary school.

New baby Congratulations to Clodagh O’Driscoll and Brian Hayes on the happyarrival of baby Fionn, a new brother for Seán and Saoirse.

Sports News Well done to Eimear Minihane, Alex O’Sullivan and Chloe Anne O’Driscoll who were Skibbereen members of the Munster Rugby team that won the U18 Interprovincial Final. Eimear also won the West Cork Sports Star monthly award as well as being named player of the tournament.

The Gabriel Rangers U12 team won the West Cork Championship while the Gabriel Rangers Intermediate team players were gallant warriors in the Cork IFC Final recently in Páirc Uí Rinn. Defeated by only 2 points, they were heroic.

SCC Transition Year kickboxing instructor Tony Stephenson won the gold medal no less at the WAKO Kickboxing World Championships. We are very proud of you all. And the future would seem to be bright with two Scoil Mhuire pupils – Lucy Hurley and Sam Logan – taking part in a trip to Barcelona as part of the Emerging Talent Programme for the West Cork Schoolboys League.

The Blue House Gallery is delighted to be opening in December with an exhibition by Gallery Artists. Along with artworks the Gallery will be selling Blue House Gallery gift vouchers – perfect Christmas present for art lovers! The following are the dates that the gallery will be open before and after Christmas: Thursday to Sunday up to Christmas (5, 6, 7 & 8th – 12, 13, 14 & 15th – 19, 20, 21 & 22nd) and then daily from Friday 27th December to 4th January 2020 inclusive. The official opening will be at 6pm Friday 6th December.

Scoraíocht & Company‘s monthly session in Newman’s Corner House will take place on Thursday 28th November at 8pm. The theme for this month is “Three, Triple or Treble” as Scoraíocht & Co is now celebrating its third anniversary. As always everyone is invited to come along and enjoy an evening of shared stories, songs, recitals, recitations and maybe an actor or two. For more information check out the Facebook page Scoraíocht & Company.

Schull Community College Parent’s Association will hold a Meet and Greet along  with its Annual General Meeting on Monday November 18th at 8pm in the school.Please come along for a chat and a cuppa and a chance to meet with the new principal, Sarah Buckley.

Hail Holy Queen Conference will take place Saturday 23rd November, at 9.30am in the Firgrove Hotel, in Mitchelstown, Co Cork. There is a great line up of speakers: Bishop Phonsie Cullinan, James Mahon, Fr. Colm Mannion OP, Fr. Marius O Reilly, Kathy Sinnott, Méabh Carlin. Confessions and Mass will be part of this wonderful day. This is a donation only event. Buses will be running from Cork city. Please contact Kay at 087 116 5669.

Mizen Macra na Feirme are having their first official fundraising Table Quiz on November 22nd in The Bunratty Inn. Start time 9pm, €20 per table of four. There will be a raffle also with some great prizes. All are welcome and you don’t have to be a Macra member to take part!

Mizen Head Signal Station opening hours for the winter are: weekends from 11am to 4pm.
Enquiries to Mizen Information and e-Centre, Goleen on 028 35000.

Talks at the Vaults in Ballydehob on Tuesday November 12 will feature Finola Finlay speaking on “Saints and Soupers. Making a difference during the Famine on the Mizen”. Start time is 8pm (old AIB building).

Schull Tidy Towns very deservedly received Small Village Commendation at the Muintir na Tíre Pride in Our Community 2019 Awards. Our Tidy Town’s stalwart Maura Allen received the award on behalf of the committee. Everyone appreciates all the hard work being done by this group all year round and it is
only fitting to receive recognition for it. Volunteers meet every Saturday morning at 10am to do a Litter Pick. Extra hands are always welcome. Meet at the front of the Pier Road Car Park – it’s only for a
couple of hours. Ní neart go cur le chéile.

Schull Community College as always has lots going on. Among the bigger things happening, the history and geography classes from fifth and sixth year went on a trip to Italy before mid-term break in October and the Transition Year German students are on an Exchange trip to Germany at the start of November. 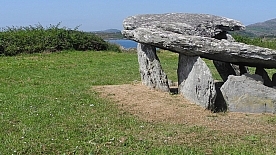 Rich remains span the centuries, from the Neolithic period portal dolmen tomb on the Schull/Goleen road, down through... 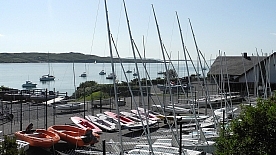 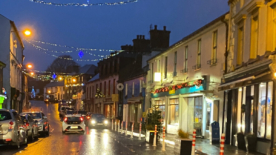 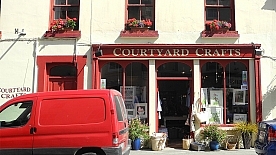